THTC has, once again, partnered with Gary Hodges, the UK’s best selling pencil artist, for a new design in aid of Orangutan Foundation, one of the leading charities fighting for the preservation of this critically endangered Great Ape. Here’s Ashwin with a bit more...

A Great Ape, in Great Danger

The first - and only - orangutan I ever met, was when I was 8 years old. He was an old man of an ape in a public enclosure in Singapore far from his homeland on the island of Borneo. He sat waiting for eager tourists and theme park punters to come and have their pictures taken with him. He wasn’t as brightly orange as the ones I’d seen on TV, with David Attenborough narrating their every graceful swing. While he was an intelligent fellow who took a keen interest in a comic book I had, and enjoyed listening to the Michael Jackson tape in my Walkman, his eyes were sullen and his muscles atrophied. Regardless of what prattle a zoo guide might choose to try to sell me, I can never believe that animals are better off under such ‘human protection’. All three species - the Bornean, Sumatran, and Tapanuli orangutan - are now critically endangered. In the last few decades, the orangutan’s forest habitat has been destroyed and degraded by logging for timber, oil-palm and acacia plantations, mining and slash and burning to clear land. When orangutans lose their forest, their source of food, they become crop raiders or been stranded and left clinging to the last standing tree. Last tree standing - this orangutan was rescued by Orangutan Foundation.

Through our good friend and collaborator, Gary Hodges, we were introduced to the Orangutan Foundation. Founded in 1990, this plucky little UK charity has worked for nearly 30 years to conserve the critically endangered orangutan by protecting their tropical forest habitat, working with local communities and promoting research and education. The Foundation is small but effective and works on the ground in Central Kalimantan, Indonesian Borneo to protect over a million acres of critical orangutan habitat with guard posts and patrols. Orangutan Foundation also runs an orangutan reintroduction programme in the Lamandau Wildlife Reserve. The reserve has a population of over 500 orangutans, half of which were rescued and released back into the wild. 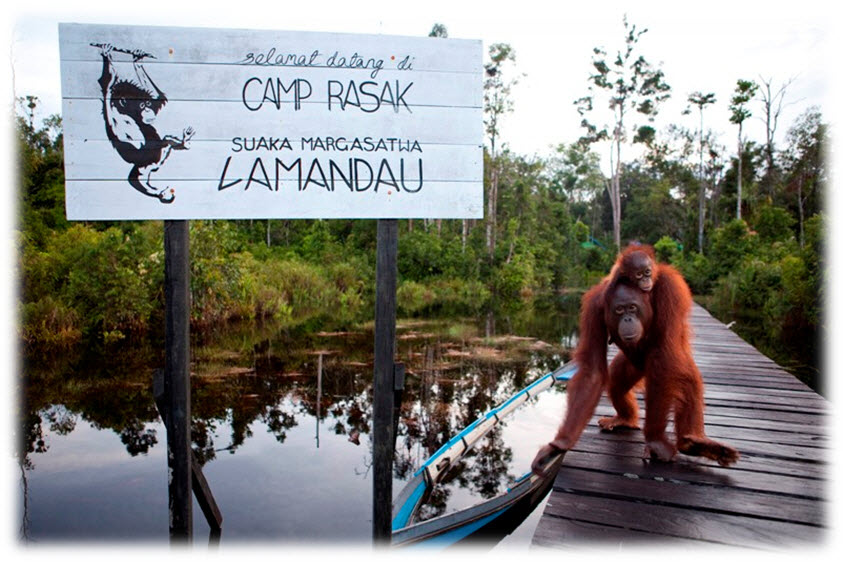 Earlier this year, the Foundation's staff put themselves at risk as they battled to extinguish illegally lit fires. In 2017, the Foundation stopped illegal mining inside the reserve and since the beginning of 2018, and its forest patrols have detected and stopped two cases of illegal logging. Just like THTC, the Foundation relies on people power and activating communities to engage and protect their environment. OF’s team in Indonesia recently organised a weekend festival in August for International Orangutan Day and Indonesia’s National Nature Day. It was an inspiring and vibrant all-weekend event involving a student group called Indonesian Conservation Cadre Communication Forum of Central Kalimantan (FK3I Kalteng). The aim was to raise awareness about the environment but also to highlight the issue of human-orangutan conflicts that occur in the area, with the hope of reducing these to prevent orangutans being injured or killed. Hundreds of young people joined in with the weekend but the message reached far beyond those who camped overnight, marched along the streets, coloured in pictures or sang and danced.

Plea For The Rainforest

Our latest design, ‘Plea for the Rainforest’ is a direct adaptation of Gary Hodges’ original work of the same title. 25% of net sales of this product go straight to the foundation, helping it continue to run its vital conservation work and community events. It costs a quarter of a million pounds a year to protect the reserve and the wildlife, which also involves running and staffing eight guard posts. If we can help meet even a fraction of those costs, our community will have achieved something positive. Our t-shirts can help to save the world. I truly believe that our ethically-sourced, sustainable garments make a positive difference. It’s not just marketing clap-trap. In the last three years, we’ve raised tens of thousands for various charities including World Land Trust, Environmental Investigation Agency and the Born Free Foundation - but we can do so much more.

If you'd like to make a difference, get involved.

At THTC we try and minimise the amount of plastic we use on a daily basis, whether that be choosing biodegradable packaging to send orders or the type of ink we use on our t-shirts. We all have the choice to reduce plastic consumption within our own lives and make conscious choices to switch with alternatives.

Today we’re going to talk about how we can reduce our own plastic consumption for beginners. Some of you may already be doing these steps, and if you are, please reach out to us to let us know how you’re getting on, or if you want to try to reduce down, please continue reading.